The Indian White Socks Syndrome: A rebel in you and me

May 15, 2018
“Rajesh, a manager in an IT services firm in India, was getting ready for a visit by a potential client. The client, an American, had asked to visit the India delivery center to assess the capabilities of the team before making the final decision. Rajesh, excited to add another feather to his cap, briefed the team in a formal meeting, telling them about the kind of work that may come and a little background about the client. At the end of the meeting, he also asked everybody to wear formals to the office on the day of the client visit. The usual dress code was a bit relaxed i.e. business casuals.
The client accompanied by the sales lead came to the facility, interacted with many people, met the delivery team, did a guided tour of the city, and went back.
A few days later, the Sales lead called Rajesh. He shared that the client did not give them the project. Shocked and disappointed by the news, Rajesh enquired about the reason. The client had told the sales lead, on much inquiry, “Your people seem to be rebellious in nature, not sure if they can work effectively with my team”. On asking how he reached this conclusion, the client said, “They all were wearing white socks”!
This was the Michael Jackson moment for Rajesh. White socks? Is there a rebel in me? 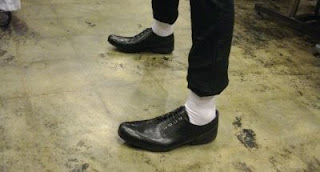 Yes there is a rebel in all of us, and we can see it in the day to day behavior of people around us, be it:

Is this a problem of education? I would say yes and no, both. For those who have not yet been told the dressing rule of wearing the same colored socks as that of the trousers, it is an education gap. Which can be filled by letting them know what it is.
However, for those who are aware and still choose to ignore it, it is a cultural issue. Like in the examples I stated above, most of the population has been educated on do’s and don’ts and still, they find it ok to not follow them. As for the white socks, while you walk around your office today, just notice how many people do that. You may mention the number of people you found in the comments below, who were either wearing white socks or even any other sports socks informal clothing.
Is there a solution to this? In education, there is, to the culture there is too.
Most organizations have corporate dressing as an early topic of training, sometimes as part of the campus to corporate programs. At the same time, it will be even more effective if we teach some of these soft skills starting from the school itself.
The TITP program, recently announced between India and Japan, is such an example. 3 lakh youth slated to go to Japan as interns, and build their skills. An added learning opportunity for this would be that the youth will also see and be a part of the work ethics and culture the Japanese follow when it comes to their job, society and country. I am guessing punctuality will be the first such learning, out of many more.
To summarize, rebelliousness is part of our behavior repertoire and it is important to understand and keep a check on it. If positive, rebellion can lead to long-lasting change, and if destructive, it will end up in a lose-lose situation.

If you need tips on building your wardrobe do read our article on fitting in your tie.

Popular posts from this blog

Internal and External Barriers to Effective Communication: And how to overcome them!

Facing an Interview Confidently: 15 Tips for making a great impression and getting the next job!